The dizzying progress in increasing the speed of communication is brushing up against physical limits. The world may start to feel bigger.

Consider the time sent to send a message between a sender in London and a receiver in New York: 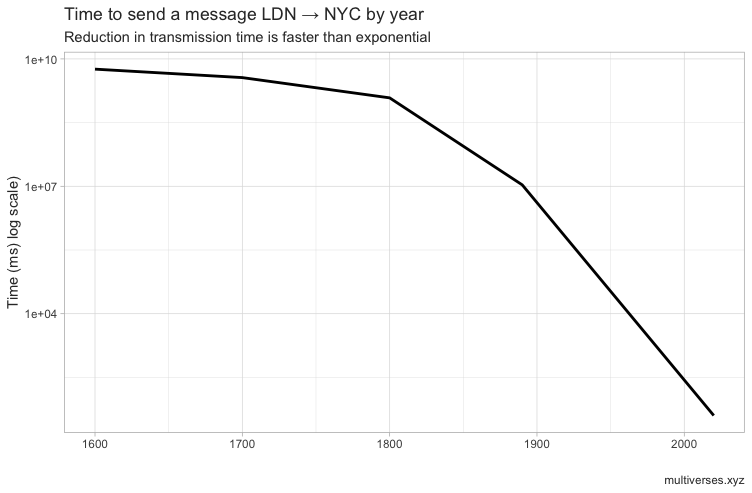 This graph already has a log scale, a straight line down would indicate exponential progress, that the line curves down indicates message transit time has reduced at a faster than exponential rate. It appears a safe bet that by 2050 this 40 ms transit time will be 4 ms. Don’t take that bet.

The speed of light in vacuo represents a fundamental speed limit. Within the framework of our current best physics, any kind of causal interaction faster than light would open a box of paradoxes: an effect being its own cause (not so bad), or an effect preventing the thing that caused it in the first place. 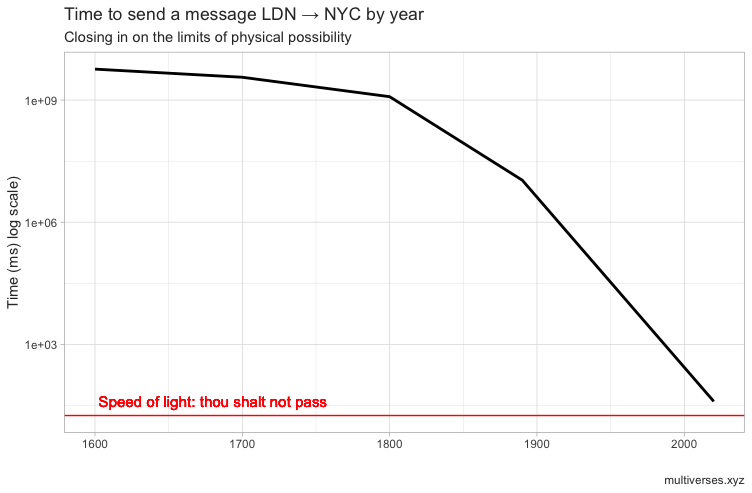 While our best physics is known to be, at most, an incomplete picture, the prohibition on faster than light information transfer is likely to withstand scientific revolutions. What then does this speed limit mean for our interactions amongst ourselves, the inhabitants of this planet, and what might it mean for encounters with extraterrestrial intelligence?

3*10^8m/s is the favoured way of writing this limit in physics textbooks, I find 300 km per millisecond is a more useful framing. Every 300km of distance a message must traverse generates a one-way delay of at least 1 ms. Given New York and London are at a distance of around 5500km no message will ever pass between those metropolises in under 18ms. That is all that technology can ever deliver us.

When perfection does not (fully) cut it

When I talk with my family in Australia the effect would be more noticeable, technological perfection would still leave a one-way delay of something like 60 ms, and 120 ms until I receive the beginnings of a reaction to anything I say.

There has been extensive research into the degradations caused by delays to voice conversations and more recently to other services like video on demand and multiplayer gaming. We can use these to understand how my long-distance calls would impair my experience of conversation:

Voice conversations are scarcely impaired by the antipodean delay, however, it is most certainly noticeable for online gaming. And in a world where services are continuously polished, in which one is used to things working better and better, the significance of this fundamental limit will become more pronounced. Indeed, these experience models will require recalibration in the future. A user’s quality of experience is not an absolute feature of a scenario (such as a game or conversation) rather it represents the gap between expectation and reality.

In the erstwhile era of fixed-line telephones it was surprising to find that calling someone on the other side of the world felt not so different to calling the next town, a different dial tone perhaps, rather more crackle and, yes, a delay but one which fit into the pauses of conversation.

In the current era of Zoom calls and “twitch” games, the difference is more evident. The interactions we have now are richer, and when the crackle is gone and the image is perfect, there is little to hide the delay. Nonetheless, an inexpert UK gamer might still enjoy racing his Australian cousins. In the coming era of holographic communication and VR gaming, this delay may mean certain interactions cannot encompass the whole globe.

By way of illustration, imagine a virtual 100-meter sprint between participants on different sides of the planet. At the last Olympics there were 100ms between 1st and 3rd place, yet watching it reveals it was far from a dead heat. Such an interval is easily perceptible to the engaged observer. Imagine a virtual Olympics: the Australian and UK runners would have no clue if they are leading or last. VR laser tag would be even worse – pulling the trigger with someone in the crosshairs would be no guarantee of a hit.

There are techniques that attempt to hide this sort of problem. Typically multiplayer mobile shooting games will respond to user actions immediately – upon pulling a trigger, the gun flares up, they do this by doing some rendering on the handset. But it is a central game server that will adjudicate whether the opponent was indeed struck.

In some online driving games, if a participant loses connection temporarily an AI will start controlling the car. Other players may not notice the replacement. Indeed algorithms running on each device may be doing a lot of the driving of opponent cars even if they have no connectivity issues – if the driving is mediated locally it can avoid problems like multiple cars occupying the same space. Of course, to preserve the general flow of the game these AI drivers drive at roughly the same speed as the human players they represent. It is hard, as it were, to say who is the driving seat in such scenarios.

For VR gaming and holographic communication, these sort of AI-mediated responses could come into their own. Suppose, in 2030, I surprise my Australian cousin with some news, an AI built into could guess what his reaction is likely to be and alter his holographic representation accordingly – perhaps injecting a certain ambiguity that flickers away as soon as his true reaction is received, 120ms later.

In the limit, we can imagine two AI surrogates located intermediate between their human surrogates, they maintain a swift and fluid conversation and report back to their masters.

However cunning these tricks, all this amounts to sweeping things under the rug. The problems are displaced not solved. As connectivity and technology improve we will have new and richer ways of interacting at a distance. The perfection these products achieve over short distances contrasted with their limitations over long distances will set into sharp relief the physical limits that bind technology.

Before one considers communication over even larger distances, it is worth remarking on a conundrum nestling in the above discussion: the size of our planet and the processing speed of our minds are curiously well matched.

Despite the impairments to communication caused by distance, even the largest separations our planet affords permit highly effective conversations. If human brains ran ten times faster or the diameter of the Earth were 10 times greater, the delay would make fluid conversation between the UK and Australia impossible. There is no obvious reason this need be the case, the processing speed of our physiology could scarcely have evolved to take into account the size of our planet. This may be the mark of intelligent design, more likely it is dumb luck.

Of love & other forms of cohesion

What happens when one moves beyond the confines of home?

What would a long-distance relationship look like between a settler on Mars and a sweetheart back on Earth? I wager they would develop an appreciation of planetary orbits. At closest approach, Mars and Earth are 55 million km apart; 55*3s for a one-way message. So a conversation might work like this: Hi, how are you? … talk for 3 minutes, the message is transmitted for 3 minutes, partner talks for 3 minutes … after a 9-minute wait you start to get a response. This is the delay at the best of times.

At the worst of times, these long-distance lovers would be, quite literally, star-crossed. The Earth and Mars would be mutually eclipsed by the Sun. In this formation, the 400 million kilometers between would give a 20-minute one-way delay.

This has implications beyond romance. Any colonies would need a high degree of decision autonomy, and it is likely they will quickly become completely self-governing. Indeed it is the distance from imposed government, one can argue, rather than the promise of riches, that has often been the motivating force in the formation of colonies and is perhaps at the front of Mr Musk’s Martian ambitions.

As humanity spreads over greater and greater distances,  new languages and customs will evolve & our common history on Earth will become a distant speck in a rearview mirror.

And what of prospects for encounters with other species? We are yet to detect evidence of extraterrestrial intelligence in our spatio-temporal neighbourhood, if tomorrow our radio telescopes do find a signal greeting us from afar, it is quite likely it will be coming not from the home planet of another species, but rather from a traveling outpost, far from home and far from any others of its kind.

Our first contact with aliens, should it happen, will not be with their heads of state, or their denizens of thei culture heartlands. It will be at the fringes. Perhaps with refugees and exiles looking for a home, or conquistadores out for gold. They will have gone a long time without talking to anyone else. Let’s make a good first impression.

The examples given have all been in “rest frames” – messages sent between users who are roughly stationary with respect to one another. A naive take on relativistic travel – that is travel at speeds close to the speed of light – might suggest communication with Earth could be made easy.

If we choose its speed correctly,  a spaceship that is one light year from Earth according to the Earth’s rest frame, is kilometers away from Earth according to the measurements taken within the spaceship. This is due to Lorentz contraction of the space. To the inhabitants of the spaceship the merest fraction of a second would pass between sending and receiving a photon, surely allowing a fluid Zoom call or Fortnite session? Unfortunately not, for time is dilated to exactly the same degree as space is contracted. From the spaceship, the Earthlings would be seen to be insufferably slow, taking weeks to produce a single phoneme, or for the game server to process an action.

The one-way speed of light is conventional

While physicists might not find fault with the above analysis, keen philosophers of physics ought to feel a creeping discomfort. For simplicity of phrasing, most of the examples are given in terms of one way speed and delay. Underlying that is an assumption that the speed of light is symmetric (and isotropic). This is a convention developed by Poincaré and Einstein and embraced by physics.

While the two way speed of light has ample experimental verification (indeed it is continuously verified by the fact that GNSS systems like GPS keep working), it’s not clear that there is even a fact about what the one way speed of light is. There is simply no way of measuring it that does not itself rely on some convention about how clocks are synchronised (or sophisticated arguments about the universe must be structured). Absolutely nothing observable depends on the one way speed of light (and of information) and it ought to be considered a mathematical figment.